I used to wonder why some older people walked hunched over. It irritated me because I felt that they were just not trying to stand up straight. Then I found out why they stooped and stumbled they were in pain! It came to me suddenly years later when I glanced in a store window as I walked by. “Oh my God, I look stooped!” It was then I realized that years of activity—even Posture Practice could not stop the inevitable. Muscles grow weak, no matter how often you work out. Bones get brittle, eyes get dim, physical pain jumps from place to place. It’s the natural progression of growing old. YUCK!

Growing Old With Our Dogs

Determined as I am to live my life as though I were going to live forever, it has made me aware of the transient state of dogs; their life with us ends too soon. Long time studies say that the average life for a dog is ten to fifteen years. Fifteen years by our count is a pretty brief period of time. It stands to reason that when they’re born; dogs have to find their Happy Place in the world fast! It’s no wonder that they all act as though they’re on steroids for a year or so! 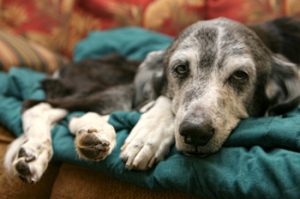 New scientific studies show that a Dog’s first year of life is actually equivalent to fifteen of our years. At age two, that makes a dog like a twenty four year old. Some of the larger breeds can be considered old at five years of age, small breeds aren’t thought of as seniors until they’re ten. Large or small, our Dogs are members of our family and their mortality is a concern when we notice the ‘slowing down’ symptoms our pets exhibit. It becomes harder for them to stand. They’re interest in playful interaction diminishes. They bump into objects they’re familiar with and are spooked by loud noises, even though they clearly can’t hear that well. Their sleep patterns are erratic and the arthritic condition they all start developing from the age of two becomes more painful as their body temperature lowers. Their coats don’t shine as much as when they were young. Their skin is more sensitive to brushing. All of these symptoms are examples of the normal aging process. Now let’s discuss the cognitive changes we’ll have a harder time spotting. From the beginning of recorded time old animals have tried to hide their weaknesses for fear of attack by another wolf in the pack or being driven from the group to eliminate the added vulnerability to all in case of a challenge by another pack. In some cases an elderly wolf would wander away to die or become disoriented while hunting or get lost relocating with the pack.

Recognizing mental dysfunction in Dogs can be more difficult for some owners who are in denial from fear of loosing their pets and other owners aren’t as close to their Dogs and they just don’t notice the progressive changes in them. If you love your Dog you are acutely aware of any behavior which deviates from the norm. Irritability is the first symptom which comes to mind. A Dog which is normally placid will jump at another pet in the house or children in close proximity. Sometimes they howl and bark for no apparent reason. An Animal Mentalist told me that old Dogs do that because when they reach a certain age they can see ghosts! Well I’m not so sure about that but I have been told by some old Dogs that they really just like to hear the sound of their own voices!

Then there’s the “Can’t hold my pee” thing. They get up at least twice a night wanting out. Further down the road they may urinate in the house, which doesn’t go over well. There is medication for CCD. Veterinarians can be of great help in treating this condition. Give them a call if you spot any of those symptoms.

People say it’s about “Growing old Gracefully.” I never understood that phrase, I’ve been clumsy all my life. Getting older doesn’t bother me, I just don’t want to look stupid! As a trainer I’ve been privileged to work with older folks and their Dogs as companion pets and therapy dogs. I’ve been so moved at the level of caring by the owners and their animals. Both receive the necessary physical and mental stimuli it takes to keep them going!

If I had to give a piece of advice in one word to owners of old Dogs it would be PATIENCE. Give the old guys a break cause sooner or later you’ll wish you had.

Many Hugs, especially for us old folks. See ya on Dog Talk!